The Scottish Cyber Awards are back!

The Scottish Cyber Awards are returning this November and it looks set to be another great night. Last year, the event was a fantastic celebration of the Cyber Security community in Scotland and we hope this year will be even more successful!

As an Information Security Consultancy operating in Scotland, the Scottish Cyber Awards are close to our hearts, as we strongly believe that there is a talented InfoSec community here. We were delighted to be part of this event, both with sponsoring an award and our CEO, David Stubley, acted as a judge for the entries. David said that;

It was difficult to pick winners in some categories because the level of competition was so high, but it is fantastic to help give the winners the recognition that they deserve.

The Scottish Cyber Awards are being held at the Sheraton Hotel, Edinburgh on the 22nd November 2017.

The application accepts user input to perform a local search function. Inputting an excessively long string of characters causes the program to crash and for an attacker to gain control of the execution flow of the application. This issue also impacts the “backup location” field.

A local buffer overflow vulnerability was discovered in Ipswitch WS_FTP Professional version 12.6. This vulnerability was found in the “local search” component of the application. Entering a search string longer than 779 characters will cause the program to crash. It is possible to overwrite the structured exception handler (SEH) after an offset of 840 characters and hijack execution flow of the application. This issue also impacts the “backup location” field and was tested on a 32-bit Windows 7 host.

The following proof of concept python script will generate a text file with a string to overwrite SEH. Once the file is generated, copy the contents of poc.txt and paste into the local search field to trigger the crash.

This will result trigger an SEH overwrite, as demonstrated by the following screenshot: 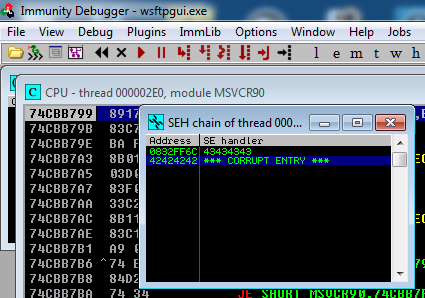 From here, we can replace SEH with POP POP RET instructions, located at:

And replace nSEH with the following code to jump to our payload:

Which will land at the payload, represented in the proof of concept as the character ‘D’ (\x44). 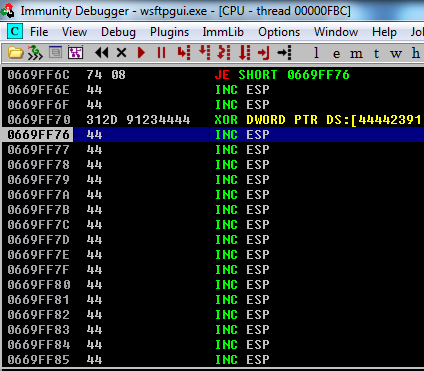 A short video proof-of-concept can be seen below:

The latest version of Ipswitch WS_FTP Professional can be found on the Ipswitch website.