ScotSoft2016, the annual conference for the Scottish digital technologies industry, will take place on 6th October in Edinburgh. The must-attend technology event of the year, ScotSoft2016 comprises the Global Forum, Awards Dinner, the Developers Conference and the Scottish Government Public Sector Briefing. This year 7 Elements are excited to be involved as a main sponsor for the event.

ScotSoft has a packed programme of talks from speakers from all over the industry including Sam Ramji, Troy Hunt and of course, our very own David Stubley will be giving a talk named ‘Breaking Bad’.

‘Breaking Bad’ will focus on just how bad could a breach of your corporate web site be for your organisation. In this talk, David will look at attacking modern enterprise application frameworks and using common exploit code to demonstrate the true impact of a breach, including gaining access to internally sensitive systems and data.

7 Elements will also be running a Capture the Flag (CTF) event to allow delegates to test their hacking skills. It is a security-focused competition with points awarded for gaining unauthorised access to applications and systems within the target environment. The CTF is aimed at all levels, so make sure you come along and put your skills to the test and maybe even win prizes!

More information can be found here.

Nimbox is a secure file sharing, collaboration, backup and cloud storage service for managing, sharing and syncing files across your environment. Their ‘vault.nimbox’ service, used for secure file sharing was found to have an unauthenticated direct object reference vulnerability. Resulting in the ability to download all customer data stored within https://vault.nimbox.co.uk.

Nimbox’s ‘vault’ application contains a ‘download as a zip’ function, which allows clients to download the entire contents of their share instead of each file individually. This function makes use of three separate parameters when making its call to the API end point.

By iterating through each value of client_id and folder_id, it was possible to enumerate valid content and download the corresponding folder.

These requests can be made without first authenticating to the service and all that is required to invoke the download is a validation token, which can be obtained through multiple means (the simplest of which was to create a trial account).

Further discussion and a proof of concept on this issue will be covered within a future 7 Elements blog post.

7 Elements conduct a large number of mobile application penetration tests as part of our security consulting services. An area of interest amongst our customers is our ability to bypass root detection, local application logic and access sensitive objects which are encrypted at rest.

What will this blog cover?

What is the Xposed Framework?

Xposed framework provides a means through which applications can be modified without having to recompile the APK file with new code. The Xposed framework includes modules as part of a repository that can be installed to hack both the android system and applications on the device. These modules are not created for malicious purposes and for example can be used to disable unwanted or untrusted functionality in an application or modify the android system to display different colours or logos.

The following link provides a good description of its capability: Link

How does hooking work?

How Xposed is able to hook and exploit applications at runtime. Quoted from the link above:

“There is a process that is called “Zygote”. This is the heart of the Android runtime. Every application is started as a copy (“fork”) of it. This process is started by an /init.rc script when the phone is booted. The process start is done with /system/bin/app_process, which loads the needed classes and invokes the initialization methods.

This is where Xposed comes into play. When you install the framework, an extended app_process executable is copied to /system/bin. This extended startup process adds an additional jar to the classpath and calls methods from there at certain places. For instance, just after the VM has been created, even before the main method of Zygote has been called. And inside that method, we are part of Zygote and can act in its context.”

Therefore, Xposed sits in a very powerful position on the phone and through the modules can “patch” the applications to modify their actions during specific operations.

What is root detection?

Straight from Wikipedia: “Rooting is the process of allowing users of smartphones, tablets and other devices running the Android mobile operating system to attain privileged control (known as root access) over various Android subsystems. As Android uses the Linux kernel, rooting an Android device gives similar access to administrative (superuser) permissions as on Linux or any other Unix-like operating system such as FreeBSD or OS X.”

Yes, it can due to the powerful position Xposed operates in. We can identify root detection methods disable or return expected data.

All applications make use of different methods as part of root detection, some more basic, while others are constructed by paid for services and defensive frameworks. Therefore, we normally carryout specific engagement based coding to bypass the security controls.

Xposed already includes one good example of a module that can bypass a number of root detection checks. The modules is called RootCloak: Link

A simple example of root detection is to look for known packages on the device using the Android Package Manager. The following code extracted from RootCloak details one method for hooking the native Package Manager application, changing the package being inspected and returning package not found:

Some applications should be allowed to run on rooted devices, what other defences are there?

While root detection is important, a number of our clients allow their applications to be run on rooted devices opting instead to use hook detection to stop malicious activity at run time.

What is hook detection?

While a large percentage of the code base was obfuscated, the main activity included a method hDetection_Fail(). Through reverse engineering and code review we discovered that this method was used by application to identify hooking. We then created a module for Xposed that located the running application, hooked the appropriate class and disabled the method before it could kill the application.

The following snippet of code was used to bypass the hook detection:

XposedBridge.log("Doug is in the App");

The outcome of loading this module as part of the Xposed framework was that the application ran, identified that it was hooked, jumped into the function hDetection_Fail and then exited the function with null and continued to operate as normal bypassing the hook detection, by using hooking………. Pause for a smile.

Where can I learn more about Xposed?

The Xposed framework syntax is large and its capability vast. The following links detail the functions included in the framework:

On the application we discovered the following code:

This looked interesting and definitely worth dumping the contents of the two string values. Going ahead and doing this produced the following results (Don’t worry code shown in next segment):

Clearly this is no ordinary compare function. However, it should be noted that it is not uncommon to see a compare being undertaken against the actual stored password string. Looking further into the code we see the following output:

This indicates that the password is stored as a PBKDF2 hash. This sucks, when it comes to bypassing the authentication mechanism. Even with the salt and the number of iteration of the cipher we still need to brute force the password. The good thing is that this can be done offline rather than within the application removing the potential to lock the password safe application.

Alternatively, we could wait for the user to enter the correct password and check the logs. As this appears to be following reasonably good practices we will chance our luck. The purpose of this function is to return a Boolean value, True or False. Xposed can automatically return any function as a Boolean value. The following code demonstrates dumping the contents of the strings as well as forcing the login by creating a Boolean value of true.

The output of this looks as follows:

The following screenshot shows the password safe application in operation but the values are of no use to an attacker: 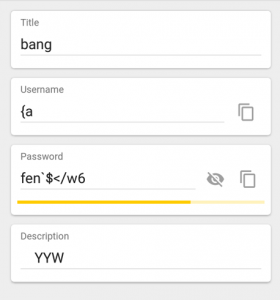 While we could not break into the application using this method; it demonstrates yet another way in which the code can be manipulated at run time in line with its current workflow.

To recap, we have the password being sent into the application by any user, so we could capture the password at this point of the workflow. Secondly, we have the salt, the number of iteration and the hashing mechanism, to attempt password guessing techniques offline. This may be a viable attack vector as a lot of password safes can destroy themselves after a number of failed login attempts.

Okay, I am getting upset now, let us take another approach!

Step Back! Why am I doing all the work…. what about you?

Getting started with this type of code manipulation can be difficult. Therefore, it’s always useful to have good examples of applications or hooks that other users have written. There is a really good application for security testing called Inspeckage, that has a number of prebuild hooks and allows users to set new hooks based on the Class name or the Method within the application. Writing your own code means deploying a module and then having to reboot the phone so that the module can be enabled. Inspeckage once enabled can be modified to carry out new actions through the hook+ option that will automatically take effect. This can be really useful when testing an application that is obfuscated. It allows the tester to see what variables are being passed between methods, which is a great starting point.

Inspeckage can be found via the following Link.

Hopefully we have been able to demonstrate that it is possible to manipulate applications to bypass root detection, hook detection and retrieve sensitive information all at run time. The following recommendations should be reviewed when coding an application.

There are loads of additional good practices that could be a blog on their own. For more information check out OWASP Mobile Security Project – Link

October the 23rd saw the inaugural Isle of Man Government Cyber Security Conference - 'CyberIsle 2019', where our CEO David Stubley was invited to … END_OF_DOCUMENT_TOKEN_TO_BE_REPLACED